The Battle of Elst.

This scenario is taken from the site of Bob Mackenzie, who publishes allot of WW2 scenarios designed for play with Command Decision. The OOB's however translate to Blitzkrieg Commander with comparative ease as the 2 systems are designed for a similar level of play.

The background to this particular scenario, as taken from Bob's site, is as follows:

At the start of the day both British battalions were still some way from the intended battlefield. Deployment was delayed by the sodden ground, pockets of resistance and German shell fire. It’s raining. At 1600 hrs the attack commences. 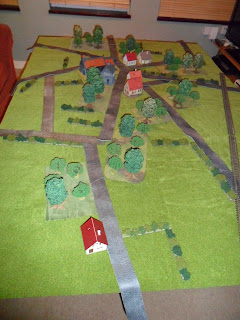 An overview of the Battlefield from the British end, the Town of Elst seen towards the end of the table. 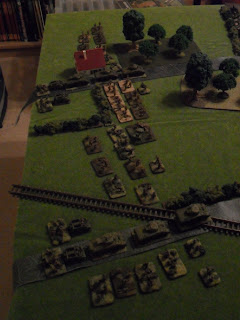 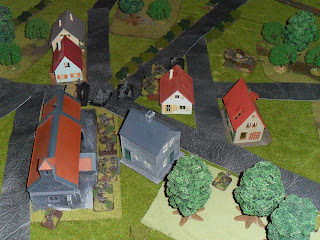 The German Defenders in Elst. The defenders have 3 Infantry companies with some support units. A SS Panther unit is also present alongside a company of SS infantry.  In reserve is an Panzer company consisting of a single Panzer III unit and a company of STUGs. The arrival of both are triggered  by the British reaching certain points along the road to Elst.

The first turn for the British brought mixed success. The Somersets and their Tank support made 2 successful moves towards their objective, whilst the Worcesters could only manage one, the CO attempted to get them moving but failed.

The Germans had an equally uneventful start. A German FAO located in the Church tower in Elst attempted to call in a Nebelwerfer barrage on the left flank of the Worcesters however the rocket fire proved inaccurate and landed off the table. The Panther moved out from behind the woods and opened fire on the Dragoon guards moving towards the town. 2 successful hits where scored but the leading Sherman unit remained unphased. An attempt to order a 2nd round of shooting failed, as did an attempt by the German CO to reissue the order. 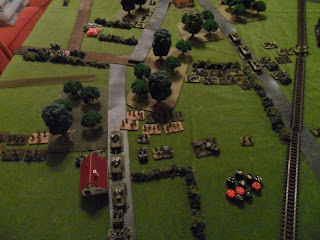 The British situation at the end of Turn 1. SS troops await to engage the Worcesters on the left flank.


The 2nd British Turn saw more success. The Dragoon Guards squadron moved up towards the Panther and returned fire. 2 successful rounds of shooting from the squadron saw the Panther destroyed. This left the Germans in a very perilous position, with no anti tank capability left to defend that road until their reinforcements arrived.

The Somersets moved up towards the woods preparing to follow up on the success of the tanks. The Worcesters Managed to get another round of movement underway but their progress was still painfully slow compared to the Somersets.

The 2nd German turn saw them take some revenge. Another Nebelwerfer barrage failed, however the company of SS opened fire with devastating effect on the Worcesters. A 2nd order to open fire resulted in a double one, which meant a further 2 rounds of firing. Thankfully for the British the next order failed, however the battalion had lost 4 units.

German Heer troops in the woods near the town also managed to destroy a unit of the Somersets and suppress another. 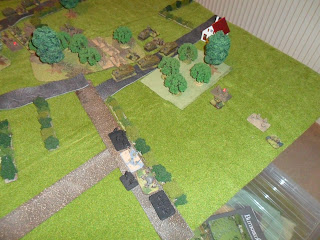 The Aftermath of the SS cutting down the Worcesters. That was 6 stands of infantry beforehand!

The British 3rd turn saw them regaining control of the situation. First an FAO accompanying the Worcesters managed to call in a barrage from a 25pdr battery on top the SS with devastating accuracy. 2 units ended up suppressed with multiple hits scored on all. Then the Dragoon Guards moved up and opened fire on the SS with their machine guns. One of the suppressed units fell back into the other knocking it out. The other suppressed unit them fled 11cm and was removed. A second successful round of firing caused the 2 renaming units to be destroyed.

Despite getting their revenge the British had suffered major casualties. Half the Worcesters where effectively destroyed in a single turn and the remaining stands of those two companies took no further significant part in the day’s events. The Somersets now moved further into the woods and where now almost at the outskirts of Elst

Thankfully German 3rd turn brought the arrival of one of their reinforcements, however it was only the Panzer III unit which came in at the top of the map. Nevertheless it was better than nothing and it eagerly took up position by the woods and opened fire on the lead Sherman unit of the Dragoons supporting the Worcesters. Sadly it only scored a single hit, but it was enough to suppress it, which may well buy the Germans precious time.

German infantry opened fire on the Somersets but thanks to being concealed by the woods only a coupe of hits where caused with a single suppression. The Germans had held a company of infantry back by the Church ready to commit wherever things looked bleak and now they moved these into the woods by the Church alongside the troops already there. This offered them a decent field of vision on the advancing British. Some more fire from Heer troops already in the woods scored a couple of meager hits on the Worcesters. 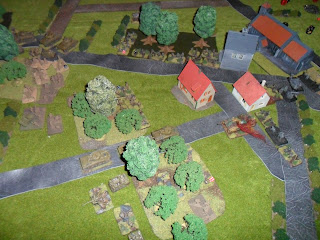 The German defenders at the end of their 3rd turn, hoping they can hold off until the Assault guns arrive.

The British 4th turn saw the remaining 2 tank units of the Dragoons open fire on the Panzer III unit which was destroyed utterly. Thankfully they failed to do anything else. The Worcesters moved up to the edge of the woods and a firefight erupted between them and Germans in the woods opposite. A single German stand was suppressed and few hits scored, the Germans returned opportunity fire but themselves only scored a few hits.

The Somersets again opened fire on the infantry in the town only scoring a couple of hits, the German response was equally dismal. The Shermans failed to do anything and not even the CO could force them to do otherwise.

The German turn 4 was got off to a dismal start when the FAO finally managing to call in another Nebelwerfer onto the Worcesters, however the this deviated right on top of the woods containing their own troops! Thankfully only one stand was covered but it suffered 4 hits. A bit of luck came when an order to open fire on the Somersets resulted in a double one. The 2 rounds of fire suppressed 2 units and scored hits on several others. The remaining German infantry opened fire on the Somersets and caused a few more hits.

The British now managed to call in their 2nd 25pdr barrage of the game which came in bang on target on the Germans in the woods, hitting 6 stands. Every single one of the stands took at least 2 hits and one even took 5. The Worcesters now managed to get get off 2 successful rounds of firing which they carefully targeted onto the units with the most hits. The managed to remove 4 units of infantry, an absolutely devastating result for the Germans

The Somersets opened fire on the Germans in the town finally removing another stand whilst the Dragoon squadron accompanying the Somersets got its act together and raced towards the town. 2 rounds of shooting removed a further 2 stands of German infantry. The turn finished with the roll of a double 1 for the dragoons resulting a half move back towards their own lines. Not actually a bad result!

Thanks to this devastating turn the Germans where now 2 over their break-point. The Germans started their turn with a roll of a 10, meaning they pulled out and the fight was over. 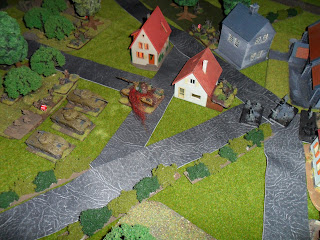 The situation at the end of the game. Only a few stand of defenders left around the down. A rather overwhelming victory for the British in a battle they historically lost.

The main mistake for the Germans was to throw away the SS troops too quickly. I should probably have recognized the danger from the British Armour and pulled them back rather than sticking around for a 3rd round of firing. Even though they cause some major damage to the Worcesters they could have been a real game changer later on and sacrificing them was a mistake.

Getting the Panther knocked out early was also disastrous and left one flank with no anti Tank capability, sadly the failure of the Stug Brigade to arrive before the break point was reached put the Germans firmly on the defensive and allowed the Dragoon guards to shoot up the German infantry at the end of the game with impunity.

For the British, even though only 2 artillery strikes were called in, both where extremely important in terms of driving away the troublesome SS and tipping the balance in the firefight with the 1st and 2nd infantry companies in the woods near Elst. Whereas the German nerblewerfers suffered some extremely bad luck indeed. Rolling doule dice for deviation means hitting the exact point you want is unlikley.

Anyway this was a very fun, if rather short, game. My thanks to Bob MacKenzie for coming up with the scenario. I assume I don't have to tell you to visit his excellent site.