This scenario is based on Charles Grant and Stuart Asquith's book Scenarios for all ages. I picked this up of a few days ago when I was in Birmingham and wandered into Waylands Forge. I remembered the book being mentioned by another poster on the Blitzkreig Commander forums so decided to hand over my cash.

On the Train back home I read through the book and was taken with one of the Scenarios called 'Taking the Initiative'. The object of the scenario is for one force to grab a foothold over 2 parallel rivers. The attacking force starts out small but with the element of surprise. The longer it takes carry out it's task the more difficult things will get. Hence the need to 'Take the initiative'.

Both sides have reinforcements coming in throughout the scenario. Though in what order they arrive is determined randomly. 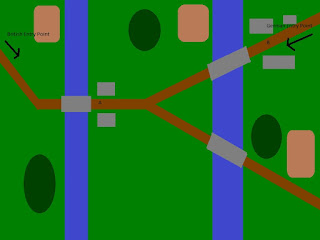 I translated the 2 sides (Red and Blue in the book) into British and German forces. The British forces are attacking.

The British Come on from their entry point at the start of the game, with reinforcements coming in later.

The Germans have a very small force at point A, a Slightly larger one at point B, with the rest of the force coming on as reinforcements throughout the game.

The British receive reinforcements on turns 2, 4, 6 and 8. The Germans on turns 4, 6 and 9. Which group arrives is random. The book suggest the use of cards, though I just rolled a dice.

Things get off to a disastrous start for the British with them failing the first command roll of the game, so the initial force simply sat at the edge of the table. Obviously their commander was nervous.

The Germans meanwhile have no such problems and whilst the force at point A remains where it is, the 2nd force at point B moves up the road to reinforce them.

The British fair little better as the first group of reinforcements arrive and proceed to trundle up the road towards the bridge but do so cautiously, the first group however still remains where it started whilst their commander checks his map. 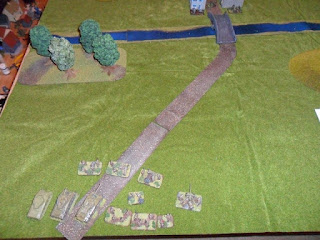 Meanwhile the German Armour start to move into position around the village. The British it seems have totally failed to get the drop on the tiny force guarding the first bridge.

Turn 3 Brings a bit more luck for the British who actually manage to bring their forces up towards the Bridge, unfortunately the Germans are in a much stronger position now.

The Germans now steamroller forwards with the help of a double 1. The Panzer 4 unit now just outside the village opens fire on the approaching Firefly unit and successfully suppresses it. 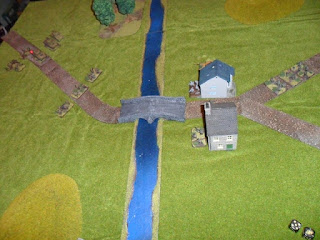 Reinforcements arrive for both sides, with the British receiving more infantry and armour and Germans gaining a company of infantry in in trucks and a Pak 40 anti tank gun unit.

The arrival of new forces does little for the British morale and they continue to only edge slightly towards the bridge. Some German opportunity fire from the village suppresses one infantry platoon and the British Shermans manage to suppress the Panzer IV unit, but otherwise things are uneventful.

The German reinforcements race towards village, however a command blunder then sends them half a move back up the road! Obviously some conflicting orders where received over the radio. Some ineffective fire from the village was the only other thing the Germans could muster. 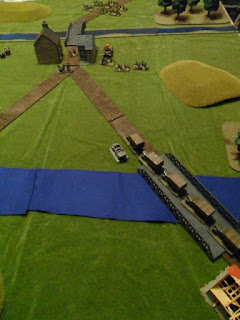 Finally the British get some full steam behind their attack and manage to move some infantry up to the river bank to cover the armour who now have reached the end of the bridge. British armour concentrates on the Panzer IV unit and finally destroys it. British Infantry also mange to destroy the German MG42. Attempts to drive out or suppress the German infantry in the buildings however prove fruitless.

The Germans have a slightly better time of things finally managing to get the trucks up to the side of village, but then failing to disembark. 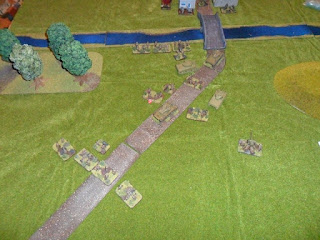 A relatively ineffective turn for the British follows with orders to storm the bridge being ignored or second guessed. Suppressing an infantry unit on the far side of the river is about the best they can achieve.

The German reinforcements now move into position and disembark. The places a PAK40 with a dangerously effective view of the flank of the British tanks. Thankfully they don't manage to get any shots off. The Germany units in the village get manage to open fire on the approaching British infantry, but then another command blunder forces them to retreat from their cover. To make matters worse 2 Jagdpanzer units now arrive for the Germans and head towards the front lines. 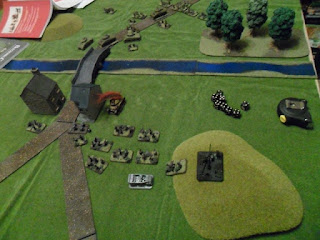 The German response is downright deadly. Firstly the Jagdpanzers race towards the village and catch a glimpse of the leading British Sherman tank unit. They destroy the unit almost effortlessly. Then then duck out of sight and place themselves in position to snipe any British tanks that dare poke their noses out from the Village.

Then Pak40 unit then fires on the flank of one of the Sherman units on the bridge, successfully suppressing it. This creates a nasty bottleneck on the bridge. The newly arrived German infantry pours fire onto the British infantry on the other side of the river and the British casualties begin to mount. 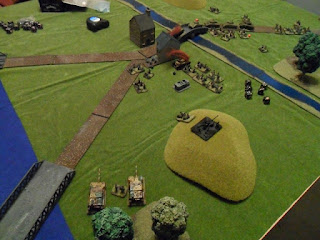 The solitary British Tank unit in front of the suppressed tank moves behind the building out of the way of the action. The remaining British armour, now unable to progress until the unit of the bridge gets its act together, decide the deal with the threat of the Pak40. Concentrated machine gun fire does the job nicely, but the German Anti Tank unit has done it's job, putting a halt to British attempts to gain a foothold across the bridge.

British infantry moves up to the river and opens fire of the Germans on the other side but it's largely ineffective.

Finally the last of the British reinforcements arrive along with the British CO, but its unlikely to make a difference at this late stage.

The German infantry on the far side of the river pour fire onto the British and destroy further 2 platoons. The tank hunters bide their time.

Finally unsuppressed the British armour pours across the bridge and over to the far side of the village. Hoping they can destroy (or at least suppress) the German Jagdpanzers. What followed was disaster, yet another command blunder causes 4 hits on the Sherman Firefly, who promptly fails all 4 saving throws and gets destroyed. British infantry pushes onto the Bridge.


The last of the German reinforcements arrive. However a poor command roll means they remain at the starting line. The Jadgpanthers suppress the remaining Firefly but fail to do anything else. The Germany infantry pour murderous fire onto the British infantry on the Bridge who are now just one away from reaching their breakpoint.

The last turn for the British is ineffective with 2 failed command rolls leaving the British Armour on the far side of the Bridge unable to do anything. The Honey tank races over the Bridge but can make no difference to the outcome. The British crossing the bridge also remain where they are.

Thankfully the last German turn is just an uneventful. The Jagdpanzers failing a command roll and the Truck mounted infantry remaining stationary for the 2nd consecutive turn. Fire from the infantry causes a suppression but nothing else. 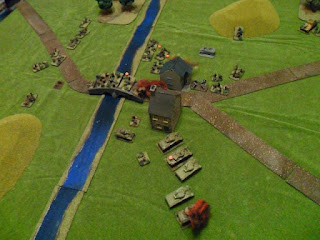 Well according the conditions in the scenario, in order to gain a victory the attacking force must have a foothold over both rivers. With the outcome being a draw in they have a foothold over one but not the other. Even though the British are in possession of the first Bridge, the German presence around the village is still significant and as a result I think its fair to declare the game a minor German victory.

Unfortunately the British, thanks to some appalling rolls in the first couple of turns, totally failed to 'Take the Initiative' and grab the bridge early. This allowed the Germans to successfully reinforce the tiny garrison and hold them off for much of the game.

Had the British acted decisively early on and the Germans been forced to split their defence between the 2 bridges on the far river then things might have gone differently. fortunately for them the British fell at the first hurdle.