Breakout scenario to be played on 13th March. 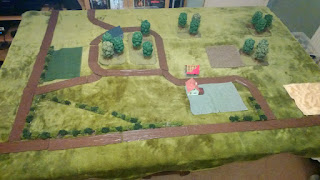 This particular scenario is based Battle of Mont Ormel scenario in the Rapid Fire N/W Europe scenario book. For those unfamiliar with this battle it occurred during the closing of the Falaise Gap. A Brigade of Polish troops was dug in on high ground to block German troops attempting to escape the closing allied trap. In doing so they endured repeated SS attacks.

http://en.wikipedia.org/wiki/Hill_262
For purposes of ease of play and because of the limits imposed by playing space and my collection, the forces involved have been scaled down somewhat. But the composition remains roughly in line with the scenario and the victory conditions haven’t changed. Instead of a whole brigade in defense the Poles have one over strength Battalion with armored support.

The original Rapid Fire scenario is supposed to take place over 20 turns, I’ve halved this to 10 in line with a typical BKC game.

The Poles are going to be attacked from 2 directions, firstly from German troops trying to break out of Falaise and a smaller SS force trying to break in to relive them. The Poles start already deployed on the high ground at the tables center dug in, with the German ‘break out’ forces divided into 2 Kampfgruppes arriving on turns 1 & 2 with a 3rd force of stragglers in trucks (with some armor) arriving on turn 4 from the road on the far right of the above picture. The SS ‘break in’ force will arrive on the road at the top left of the table on turn 6.

To win the Germans must evacuate at least 50% of their ‘break out’ units from either on the 2 escape roads on the top left of the map by the end of turn 10, but this does not include transports. The Poles must prevent 75% of the German ‘break out’ force escaping to win. Any result between these 2 is a draw. As the Poles have nowhere to retreat to and the Germans are under pressure to break out the normal break point rules do not apply.

The scenario places allot of pressure on the Germans to move quickly, getting into a protracted battle with the Poles is to be avoided, the Germans need a swift breakout.

I’ve broken the Poles up into 3 companies, and assigned some of the allied armor to each company. The German kampfgruppes historically where a mix of all sorts of units including fallschirmjäger, however for ease of play everything is just classified as Heer.

The stragglers group are an eclectic mix of infantry and armored vehicles from various units. Historically most where on foot, but the scenario in the Rapid Fire book calls for them to be mounted to aid a swift escape.